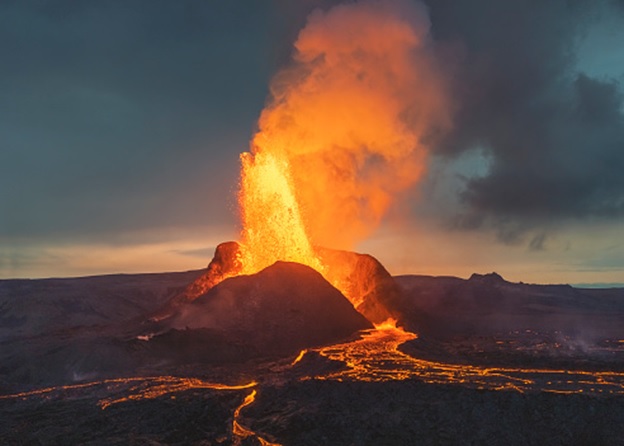 It is so hot deep beneath the earth that rocks slowly melt and turned into a thick flowing substance termed magma. Volcanoes are events that take place in the earth’s crust which further release steam, gases, ash and hot liquid rock recognized lava. Lava when cools or hardens, turned into a form of a cone-shaped mountain that we recognize as a volcano.

Where some volcanic eruptions are explosive others might not. The intensity of an eruption’s explosivity depends on the composition of the magma. Gases can escape easily if the magma is runny and thin that further leading to flow out of the volcano. In addition, gases cannot pass out easily if magma is sticky and thick.

Volcano eruption can be disastrous and even deadly. Many times volcano bursts and suffocate animals, plants, forests and humans as well. volcano eruption furthermore can cause lava flows, blasts, avalanches, hot ash flows and floods. The volcano can take place both in the ocean and on land. An erupting volcano can also result in flash floods, earthquakes, tsunamis, rockfalls and mudflows affecting the earth to the extent. Since lava is a poor conductor of heat, it cools down slowly taking a certain period.

How Are Volcanoes Formed?

From within the earth, when magma works its way to the surface a volcano forms. The volcano erupts to form ash deposits and lava flows. Over time, if the volcano continues to erupt, it gets thicker, bigger and stronger which might ultimately impact everything close to it.

Why Do Volcanoes Erupt?

There are huge slabs termed plates in the earth’s crust which stick together. However, sometimes these plates create movement and remain in motion. The friction is the reason that causes a volcanic eruption or an earthquake close to the edges of the plates. The process is called “plate tectonics” in general which is backed by a broad range of evidence. The plates in tectonics remain in motion and continue moving in different directions at different speeds. During the process, the plates many times crash together and resulting in earthquakes and volcanoes.

What Are the Different Stages of Volcanos?

The volcano has been the subject of scientists for years. Many studies have been conducted to explore more about a volcano, how it works, how volcanoes erupt, what is the science behind them and more. Geologists have characterized volcanoes into major three categories including:

Steep sided volcanoes are composite volcanoes that are comprised of various layers of rocks. These rocks are usually made up of high viscosity ash, lava and rock debris.

Oval and circular cones made up of small fragments of lava are cinder cones which is one of the simplest types of volcanoes. They are built from particles and when erupting severely they can cause huge damage.

Shaped like a bowl, shield volcanoes are the type of volcanoes that are caused by the eruption of highly fluid lava. This type of lava is named for its huge fluid that brings many disruptions along with when fluid.

These types of volcanoes are formed when the lava is too thick and erupted at the ground surface.

How Many Volcanoes Are There?

To get the answer to this query is fairly difficult. However, there are over 1500 active volcanoes exist on the Earth. In addition, under the ocean, there are around 100 active volcanoes. Moreover, in the United States, volcanoes are mainly found in California, Alaska, Hawaii, Washington and Oregon.

Some Noteworthy Volcano Eruptions
Here are a few examples of volcano eruptions across the globe:

Krakatoa in Indonesia was a dormant volcano which awakened and causes one of the biggest volcanic eruptions in 1883. It was one of the most massive eruptions in history and the sound of the eruption was heard in Australia as well. In addition, a massive amount of ash clouds has been created which covered the earth. Moreover, that volcano eruption has severely impacted the global temperature for straight 5 years. Also, over 40,000 people died in that eruption. It impacted the entire chain of the volcanic island as well.

Situated on the Caribbean island, it was another dormant volcano that took place in 1902. This volcano erupted in a disastrous horizontal explosion that ultimately result in a massive cloud of ash released toward all nearby areas. The incident occurred when the side of the volcano exploded and thick lava flowed straight into the city. It has killed nearly 30,000 people and is known as one of the most devastating eruptions in history.

An active volcano, mount Fujiyama last erupted in 1708 in the tallest mountain in Japan. Mount Fuji is nearly 3776 meters high and it was one of the most iconic volcanoes that took place in history. The volcano is still in the form of dormancy however there are no eruption incidents reported for more than 400 years. In addition, the last eruption reported globally was for about 4 weeks during which it has impacted surroundings including towns and villages with ash and cinders. Nevertheless, it is now one of the most famous, thoughtful and most-visited tourist spots with a countless number of climbers vigorously climbing the mountain top.

Volcanoes are events that take place in the earth’s crust which resultantly release gases, steam, ash and hot liquid rock. They are hazardous for all humans, and plants and can erupt under the ocean and on earth as well. Many things still are remaining to be found about this nature’s disaster “volcano”.