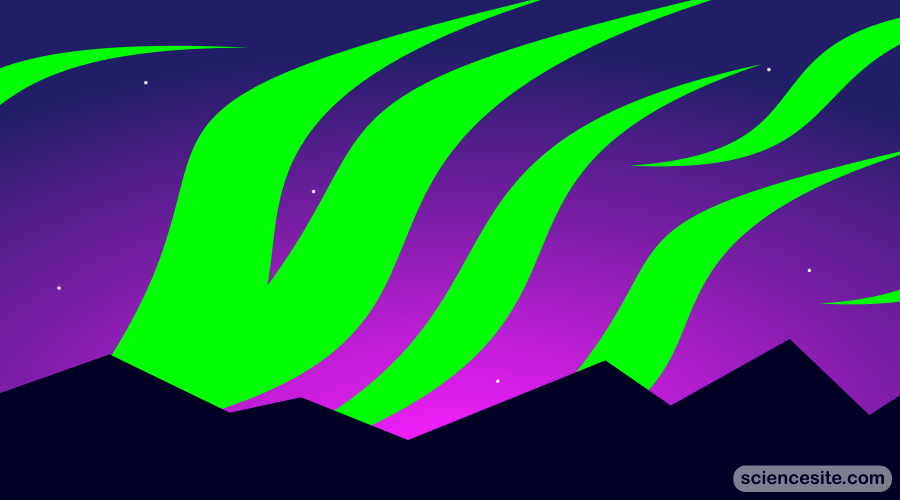 Sometimes when you look up at the night sky, do you see beautiful colors? Well, today we are going to talk about that in our post. If you ever find yourself near the North or South Pole, you might be in for a pleasant surprise. Beautiful light displays appear frequently in the sky.
This astounding light is called Auroras. These beautiful lights in the sky appear at the north and south pole. The ones in the North refer to aurora borealis or northern lights. And the ones in the south are known as aurora australis or southern lights.

What is an Aurora?

The Aurora Borealis shows up in a multitude of colors, sizes, and shapes. It can be a completely unnoticeable static grey/green smear, or it can cover the entire sky with dazzling multi-colored light curtains. The Aurora Borealis, also known as the Northern Lights, is a popular wish list topic, and much has been written about Mother Nature’s most spectacular display.

How does it happen?

Even though auroras are best observed at night, they are created by the Sun. The Sun not only delivers us heat and light but also a lot of additional energy and microscopic particles. We are shielded from most energy and particles by Earth’s protective magnetic field, which we are unaware of.
However, the Sun does not always send the same amount of energy. There is a steady flow of solar wind, as well as solar storms. The Sun burps forth a gigantic bubble of electrified plasma that can move through space at tremendous speeds during one type of solar storm called a coronal mass ejection.
Small particles and some of the energy from a solar storm can go along the magnetic fields by entering the atmosphere from the north pole and south pole.
The particles collide with gases in our atmosphere, creating spectacular light displays in the sky. Green and red lights are emitted by oxygen. Nitrogen on the other hand causes blue and purple colors.

How and where can you observe the Aurora Borealis?

Lapland, Finland, is one of the best spots to see the northern lights and is perhaps the most popular destination for aurora chasers. This is because the location is within the ‘aurora band zone,’ which is where the majority of aurora activity occurs.
You’ve decided to witness the northern lights. Here’s how to make your aurora borealis viewing vacation a success.

⦁ The best times to watch the aurora borealis?

The northern lights are best observed at night. This is because the aurora is less bright than the sun. Because of the long dark hours throughout the day, clear winter periods are ideal. The ideal period to see the northern lights is between late August and early March.

The finest sites to see the northern lights are in rural parts of most Scandinavian countries. Light pollution from city lights makes it difficult to see auroras in urban areas.
Lapland, Finland, is one of the best spots to see the northern lights and is perhaps the most popular destination for aurora chasers. This is because the location is within the ‘aurora band zone,’ which is where the majority of aurora activity occurs.
Troms, Norway, Kiruna, Sweden, Fairbanks, Alaska, and the Northwest and Yukon regions of Canada are among the other locales.

The shifting flow of charged particles and varying magnetic fields control the patterns and shapes of auroras.
The ‘beams’ move across the sky at different speeds. Auroras are the optical traces of electrical currents moving up and down magnetic field lines that are nearly vertical at high latitudes, resulting in vertical light rays.
Because plasma particles move in reaction to the geomagnetic field, the aurora appears as moving curtains of light.

Unexplained claims of sounds heard during auroral displays are less widely known, with several reports suggesting a hissing noise followed by a stronger crackle or clap.

⦁ Aurora’s most common colors are red and green

The colors of the northern lights are determined by how energetically electrons clash with oxygen or nitrogen. Oxygen creates greenish-yellowish or red light, whereas nitrogen emits blue light; when the two are combined, purple, pink, and white are produced. We are more likely to spot the oxygen greenish line releases because our night vision is particularly sensitive to green light. Nitrogen auroras can be blue or a combination of blue and red (purple). We can’t observe some auroral nitrogen emissions since they are in the ultraviolet spectrum.

⦁ Only for night owls

Auroras are most common in late March and late September, but they can happen randomly throughout the year. Because the evenings are longer in the winter, it’s naturally a fantastic time to see the aurora. The brightest displays usually last 1–3 hours, with the greatest viewing times falling between 10 p.m. and 2 a.m. There’s no magic hour for seeing auroras, so dedicated aurora chasers keep a watch on our genuine magnetic indices (that show the level of magnetic activity) and work through the night if necessary.

⦁ Auroras are found on other planets as well

Other planets in our solar system, such as Jupiter, Saturn, Uranus, Neptune, and Mars, also have auroras. The lights have been detected at the magnetic poles of other planets, similar to the aurora on Earth.

What should one expect from this?

You’ve seen a lot of photographs and videos of the Northern Lights on the internet. There are a few things you should be aware of to set your expectations in check. There’s no assurance that you’ll see the northern lights on the first night after you’ve chosen a site.
You must keep in mind that the northern lights are both elusive and wonderful, yet they are well worth the wait.
When viewed with the naked eye, these lights appear in stages, which is why movies and internet images may be deceiving. In the initial stage, a greyish band appears and no other colors are visible. After a few minutes, the colors begin to emerge, and you can now see a few green northern lights columns. The beautiful moment when the greenish rays form a ‘crown’ and begin to ‘dance’ is the last stage.