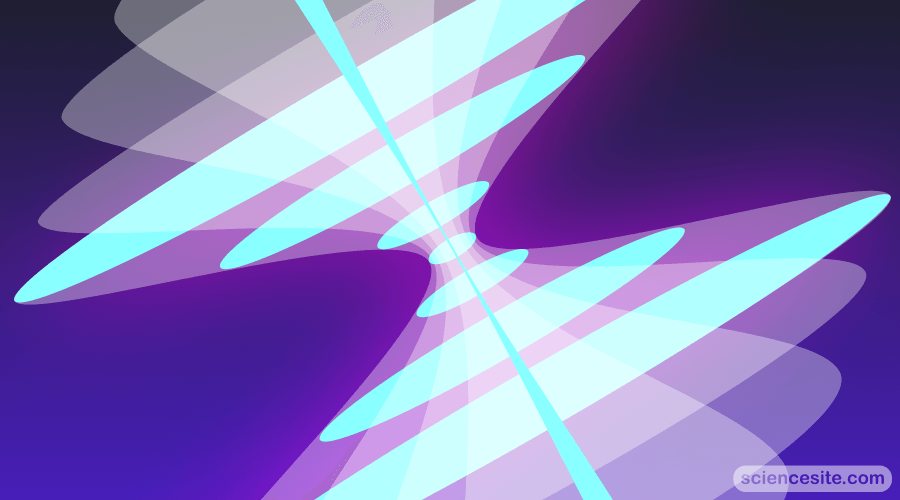 Have you ever seen weird tunnels running through space-time? Well, that just might be a wormhole.  We’ve all heard about fancy portals that allow us to travel to far-flung locations in a matter of seconds. It sucks and spits you out somewhere else. Then you ask yourself, “How did it happen?” That one person suddenly produces a sheet of paper, folds it in half, and punches a hole through the fold. There you go, Wormhole! A fold that connects two far-flung places.

A wormhole is a specific solution to Einstein’s general relativity equations that creates a tunnel between two distant places in space or time. The length of this tunnel should ideally be less than the distance between those two places, effectively making the wormhole a shortcut. Wormholes are, as far as we know, only hypothetical.
They are a staple of science fiction and have caught the popular imagination. Although they are valid general relativity solutions, scientists have never been able to create a stable wormhole in the real world.
However, the stability factor prohibits it from existing. White holes have been explained in a vacuum so far. White holes vanish as soon as we add mass to the system. As a result, the wormholes become unstable.
Another possibility is that a wormhole has two black holes at its endpoints. A wormhole cannot simply be ‘built’ in any event. Before a wormhole can be produced quantum entanglement is used.

Traversable wormholes would allow rapid travel in both directions from one section of the universe to another inside the same universe, as well as transit across universes. These wormholes are essentially time and space shortcuts.
The good thing about these wormholes is that we still can’t show evidence after ten years of research. The bad thing is that these odd objects require a lot of negative mass to keep them open and prevent them from collapsing if they exist at all. If Lorentzian wormholes exist, it appears to be quite simple to convert them into time machines.

Even stranger are Euclidean wormholes, which exist in “imaginary time” and are fundamentally virtual quantum mechanical processes. These things can’t be beautifully explained in terms of a well-behaved classical gravitational field. You’ll need tons of quantum physics knowledge to understand even their most basic qualities.

How can you find wormholes?

Do you want to know how to spot a wormhole? Such paths could connect one part of our universe to another part of our universe at a different time and/or place, or even to another universe entirely.
The strategy focuses on detecting a wormhole near Sagittarius A*, which is assumed to be a supermassive black hole at the galaxy’s center. While there’s no indication of a wormhole there, it’s a good spot to look because wormholes are thought to require high gravitational circumstances like those seen in supermassive black holes.

Where to find wormholes?

⦁ Center of the Milky Way

In the year 2015, Italian astronomers proposed that a wormhole could exist 27,000 light-years away in the Milky Way’s center. Normally, exotic matter would be required to keep wormholes open, however, scientists believe dark matter is capable of doing so.

Even though space isn’t empty—at the atomic level, it’s a cauldron of seething energy that comes and goes. In the ‘quantum foam,’ temporary black holes are constantly being formed. However, if we wanted to make one permanent, we’d require a lot more energy.

⦁ Inside a black hole

Some researchers believe we’d find a wormhole instead of a singularity at the center, as predicted by general relativity. The jury is yet out on whether it is large enough for a human to pass through.

How to identify a wormhole?

Gravitational waves from merging black holes fade fast, but two colliding wormholes would produce an echo that may be detected in future studies.

Microlensing occurs when a wormhole passes in front of a distant star, bending the star’s light slightly. This method has already been used to locate rogue planets.

Some physicists believe that wormholes are black holes in disguise. It’s a risky venture, but sending something into one would confirm whether or not wormholes exist.

Are wormholes dangerous for humans?

Moving at a quicker rate than light is one way to travel around the cosmos in a single lifetime, yet we could be able to achieve it in a single second by using a physical wormhole to travel vast distances at once.
And it turns out that humans may be able to make the trek but there is a catch to it. There are disadvantages to this strategy, including the fact that such wormholes would be minuscule, meaning that even the most rigorous workout routine would not be enough to make humans slim enough for the journey.
From one side to the other, the wormhole traveler would only take around a second. However, anyone not accompanying them would witness hundreds of years pass by. It’s not as if you can just shove them in.
This is significant for several reasons, the most important of which is the ever-increasing intersection of physical risks to human survival.

From this post, we can conclude that wormholes may connect not only two different sections of the universe but perhaps two entire universes. Similarly, some scientists believe that time travel may be possible if one of the wormholes mouths is manipulated in a precise way.
Even if wormholes could be discovered, today’s technology is insufficient to enlarge or stabilize them. However, scientists are continuing to research the concept as a means of space travel in the hopes that technology may be able to use it in the future.