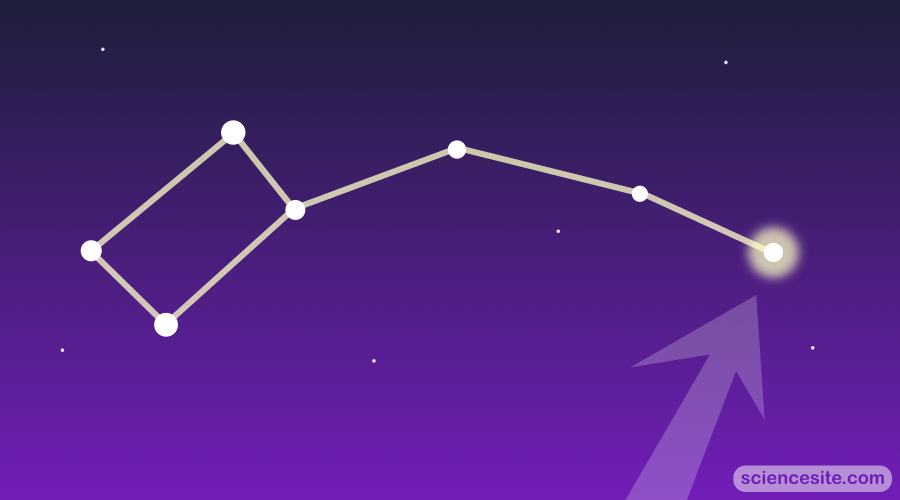 The North Star is not the brightest star in the sky. Yet it is still easy to identify from any place on earth. It might help you position yourself and find your way if you’re in the Northern Hemisphere. As it’s placed in the direction of the true north (or the geographic north, which is opposed to the north magnetic pole).
The North Star is the northern sky’s anchor. It is a landmark, or sky marker, that aids individuals who follow it by glowing brilliantly to assist and lead them to a specific location. It also has symbolic importance, as the North Star is seen by many as a source of optimism and inspiration.

What is Polaris or North star?

The North Star, often known as Polaris, is a star that appears nearly straight above the Earth’s rotating axis. Every other star appears to spin around the axis as the Earth rotates. It makes a circle in the sky, but the North Star appears to remain stationary. However, no matter what time of night or season it is, a traveler in the Northern Hemisphere can follow Polaris to the north.
The North Star is neither the brightest nor the closest star to us in the night sky. However, it is one of the most important stars of recent centuries in terms of culture, science, and navigation.
Polaris is unique. It traces out a fairly short circle for one whole day since it is so close to the celestial pole. As a result, it always appears in nearly the same location in the sky. This makes it a reliable means to determine the direction of the north. If you stood at the north pole, it would look directly overhead, but farther south, it denoted the direction of the north.

How to search the North star?

Polaris is found in the constellation Ursa Minor, the Little Bear, which also includes the Little Dipper group of stars. Polaris, the North Star, is located at the end of the Little Dipper’s handle. With extremely little moonlight or street illumination, a handful of the stars that make up that constellation can be blocked out. So, the easiest method to spot Polaris is to take advantage of the “Pointer” stars. Dubhe and Merak are stars that form the “bowl” which is afar from the scoop-shaped Big Dipper’s “handle.” Polaris can be found by drawing a line between these two stars and following it out roughly five times the distance between them.
Also, note that where this star appears greatly depends on your latitude. Another thing to keep in mind regarding this star is that it is like it is a trophy that has been passed down via the stars over the ages. The rotation of the Earth’s axis shakes over 26,000 years, similar to how a spinning top wobbles as it spins. This causes the celestial pole to move in a slow circle across the sky, passing by various stars over the ages.
Sometimes, as is the case in the Southern Hemisphere right now, there is no bright star near the celestial pole. The celestial pole pointed toward the bright star Vega around fourteen thousand years ago, and it will point to Vega again in about twelve thousand years when it sweeps out its leisurely circuit.

How to navigate with the help of North star?

It is easy to locate a North star and this makes it easy for people traveling without a compass to navigate themselves.
The North Pole lies immediately overhead. This means that we must point north anytime we point to the location on the horizon just beneath the North Star. The best way to discover the North Star is to look for the ‘Big Dipper,’ a group of seven stars that is easy to spot.
Most travelers in the past as well used Polaris to travel especially across oceans without the need for a magnetic compass. NASA claimed that even astronauts used Polaris to position themselves when searching for the moon.

Why is the North star so important?

This North star is an extremely important star and here’s why. It attracts attention because, unlike all the other stars in the sky, it remains stationary from nightfall to dawn every night, never rising or setting. This is often mistaken by most people as being the brightest star in the sky. But that is not true. It appears this way because it’s a giant star with a huge diameter. The diameter and mass are forty bigger than the sun.
However, it is not the brightest star as it is far away compared to other stars. This distance reduces its brightness.

How are the stars structured and how many?

Because they guide the way to Polaris and are widely used to identify true north, Dubhe and Merak are known as the Pointer Stars or the Pointers. A hypothetical line constructed from Merak to Dubhe and stretched by nearly five times the distance between the two stars leads directly to the North Star. Along this imaginary line, Polaris is the brightest star.
The Big Dipper, a conspicuous group of stars, is a great place to start looking for Polaris. In order to find Polaris, you need to look for the pointer stars Dubhe and Merak. The outside half of the Big Dipper also known as the bowl is outlined by these two stars. To keep it simple. Draw a line from Merak via Dubhe to Polaris. It should be five times the distance between Merak and Dubhe.

Is the north star just one?

Firstly, Polaris is a triple star system, or three stars orbiting a shared center of mass. We experience this as a single point of light. Secondly, Polaris A, the central star, is a supergiant with a mass of nearly six times that of our sun. And lastly, Polaris Ab, a near partner, orbits Polaris 2 billion miles away. Because it is so close to Polaris, you are unlikely to glimpse this star.