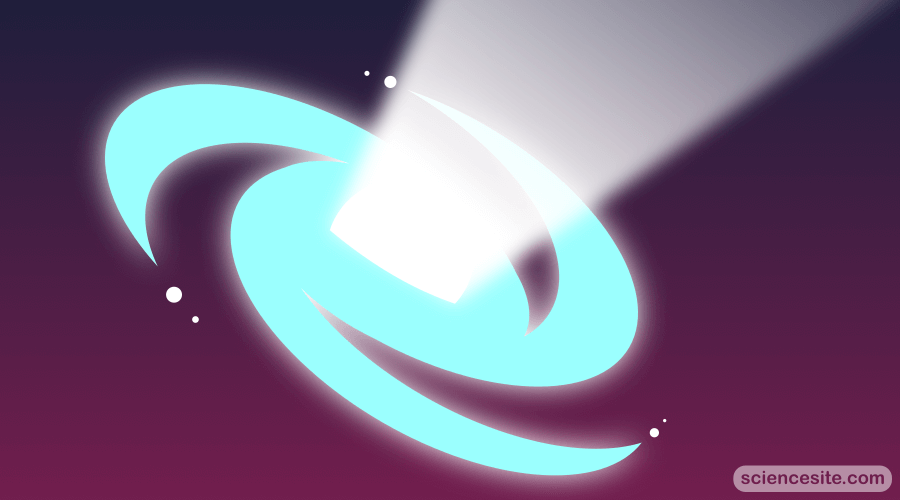 Did scientists just create these stories or do they exist? Will white holes be making a return to the spotlight for experiments? Let’s clear that air of confusion in this post.
White holes are fictitious cosmic locations that operate in the opposite direction of black holes. Not a single thing can enter these holes, just like nothing can escape a black hole. To be a fabrication of general relativity white holes were long assumed. It arose from the same equations as their black hole cousins.

What are white holes?

White holes are hypothetically the opposite of black holes. These holes, just like black holes, emit light. This happens if they drew in nearby stars, dust, passing spaceships, or anything else that comes too close. It can and will let matter escape into the universe. Both white and black holes were once totally theoretical, but now black holes are related to numerous real celestial objects.
A black hole at its center is thought to be included in our own milky way galaxy. Could these wormholes be space-time tunnels via which brave explorers could travel across immense distances in the universe in an instant?
However, additional consideration revealed that white holes would be incredibly unstable and thus extremely unlikely to form, so unlikely that they have received little attention in recent decades. They are, without a doubt, fringe science. No astronomical source has yet been identified as a white hole.

The reason they cannot exist

While general relativity theoretically describes white holes, no one knows how they develop. When a star collapses into a compact volume, it creates a black hole, however watching this video backward isn’t physically possible. A functioning star erupting from an event horizon would resemble an egg unscrambling itself.
Even if enormous white holes did appear, they would most likely disappear quickly. Any outgoing matter colliding with the matter in orbit would collapse the system into a black hole.

White holes appeared to have the same fate as wormholes for some time: these were presumably forbidden by reality due to their mathematically feasible space-time contortions. However, some physicists have recently attempted to resurrect white holes to rescue their siblings that are darker from an untimely demise.
According to physicists, these holes can just shrink and eventually disappear. Most people are still trying to find the answers to the questions, “How do black holes disappear and What gives rise to white holes.” The two questions fit together neatly, but the transition from one to the other requires violating the general relativity equations.
The existence of white holes raises the possibility of solving a mystery: what happens at the center of a black hole. We see massive volumes of matter spiraling around black holes before colliding with them. All of this falling debris reaches the hole’s surface, the “horizon” or point of no return, and plummets to the center.
Scientists claim that these holes get so small till they no longer exist. They outline a scenario in which a black hole shrinks to the point where it no longer obeys the laws of physics. common-sense rules of stars and billiard balls, using tools from this framework. Quantum randomness takes over at the particle level, and the black hole could turn into a white hole.

How does it work

According to a famous astronomer, such a microgram-sized white hole would have none of the gravitational drama of its black hole ancestor but would conceal a vast interior carrying the information of everything it had consumed in its former existence. The white hole, which is too tiny to attract orbiting matter, may be stable enough to finally spit out all the information acquired by its predecessor.
White holes can dominate the universe if stars burn out and the black holes vanish. This way scientists can easily identify the items as big particles. However, those days will be countless billions of times the universe’s current age in the future. Haggard described it as “the weirdest temporal scale I’ve ever seen in physics.”

That is an excellent question. Unfortunately, the quick answer is no. One can think of a white hole as the inverse of a black hole. If you were traveling towards the center of a white hole, the massive amounts of energy bursting from the white hole would cause you to disintegrate before you arrived.
White holes are time-reversal analogs of black holes that arise from the equations of general relativity. In reality, they sound like energy-generating objects, therefore their existence looks improbable. As of yet, there have been no white holes discovered. Some scientists believe the Big Bang was a white hole, but this has yet to be verified.

This is what it comes down to

A white hole’s aftermath, on the other hand, maybe found wherever. The Big Bang’s explosion of matter and energy appears to black hole scientists to be possible white hole activity. The geometry in both cases is pretty similar. To the point that they’re mathematically similar at times.
Some researchers are looking for white hole signatures in the universe’s first visible light. This image is known as “the Big Bounce.” Although the universe may not be able to bend into all of the shapes that general relativity enables, Haggard believes that physicists should pursue this rabbit hole to its conclusion. He also believed that these white holes might have some interesting consequences after all. And if the results were not as expected, ignoring them will not be the right way to go.

Once you read this till the end your confusion surrounding white holes will be cleared. This is always going to remain a mystery because there is no true evidence of seeing one in the galaxy. One of the key reasons they are not regarded to be genuine is because white holes reduce entropy. Others say white holes are the final element in the dark matter jigsaw. White holes, on the other hand, are currently mathematical monsters that have yet to manifest.