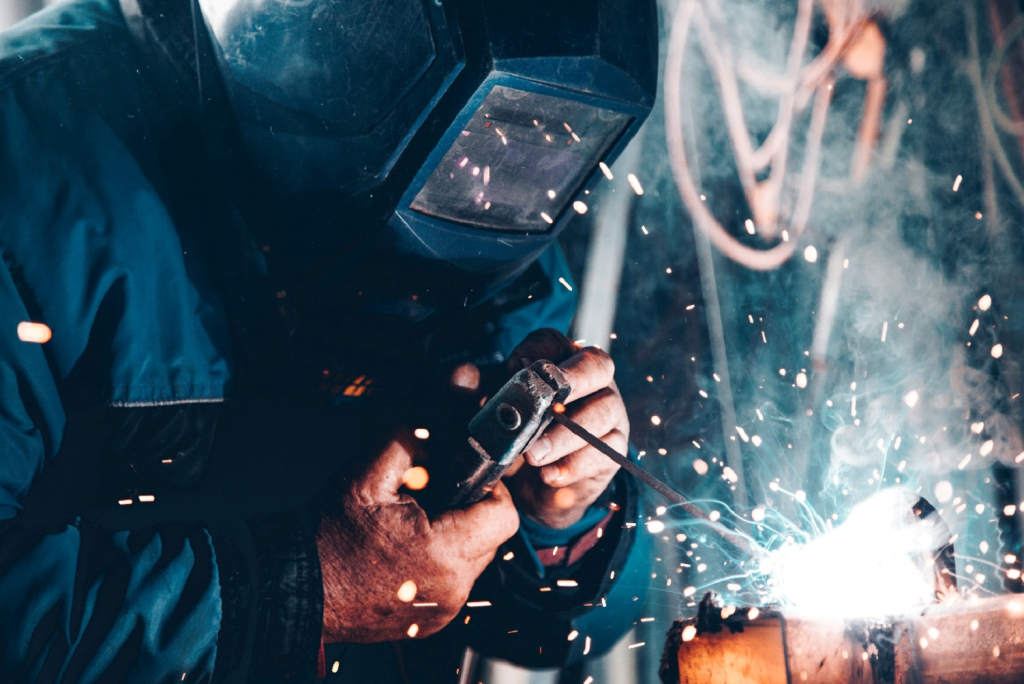 We must accept that friction is the dominant force on the planet. The surfaces of two or more materials rubbing together affect how much friction there is. Friction is increased in direct proportion to surface roughness. Heat is also produced through friction. For example, you can feel your hands warming up if you rub them together quickly. There are both benefits and drawbacks of friction. Which we will discuss in this post. An example of one of the useful properties of friction is welding as in this photo below.

Friction refers to a force that prevents one thing from moving against another. Friction is created when two surfaces slide over one another or attempt to move across one another. For instance, friction makes it challenging to push an object down the floor.
The direction in which an object moves or attempts to move is always the direction in which friction operates. A moving object is always slowed down by friction.
Since friction keeps automobile tires from skidding on the road and keeps our shoes from slipping when we walk, it can be a valuable factor. Walking causes friction between the tread of your boots and the ground. The ground is gripped by the friction, which in turn prevents sliding.
However, in some cases, we also want to reduce the amount of friction. So how do we do that? Oil is used to lessen friction between moving elements in a car engine. Oil spreads over the elements and prevents them from rubbing or causing friction with each other. Because there is less friction, the moving parts of the car last longer and generate less heat.
There are numerous exceptions to every frictional general rule. For instance, particularly smoothly polished materials, like glass plates, that have been carefully scrubbed of all rough particles may hold to each other quite strongly. On the other hand, two rough surfaces (like sandpaper) sliding against each other can have more friction because their services are not smooth

It affects an object that is lying on the surface. For instance, when you place your foot down on the road while trekking in the forest, it causes static friction between both your shoes and the surface. Without static friction, it would be challenging to walk since your feet would easily slip from under you. Attempting to walk on ice will result in exactly that. The reason behind this is that ice provides very little friction and is exceedingly smooth. Some examples of static friction include skiers battling the snow, rubbing two hands together to produce heat, and a table lamp is positioned on the table

When items slide across a surface, friction is what makes them slide. Static friction is more powerful than sliding friction. Because of this, it’s simpler to move furniture once it’s moving as compared to stopping it from moving. When you use the brakes on your bicycle, for instance, the brake pads slide against the rims. The wheels’ motion is slowed by this friction, allowing you to stop. Examples of sliding friction include a brick sliding across the floor or two cards in a deck bumping into one another.

When items roll over a surface, friction is what makes them move. As compared to static friction or sliding friction, it is much weaker. This explains why the majority of ground transportation methods, such as bicycles, automobiles, four-wheelers, scooters, roller skates, and skateboards, all have wheels. As an indication, the internal and external cylinders of this wheel turn with less resistance because of the ball bearings. Some examples of this include rolling logs on the ground or the rolling wheels of a car.

The friction that affects things moving through a fluid is referred to as fluid friction. A substance that may flow and adopt the structure of its container is called a fluid. Liquids and gases are both fluids. Fluid friction can be felt if you have tried to force your open palm through water in a bathtub or swimming pool. Another illustration would be a swimmer cutting through the borders of a body of water when the water is providing the swimmer with fluid resistance. Examples of this include the flowing of ink in pens and swimming.

1. Friction makes it possible for us to move freely when walking.
2. Leaning the ladder up against a wall is helpful.
3. The ability to convert one type of energy into another is made possible.
4. You can put things up without them slipping.
5. Vehicles stop through brakes as a result of friction.

1. Because it always opposes the motion, more energy is needed to get beyond it.
2. It results in machine wear and tear.
3. It shortens the lifespan of a vehicle’s moving parts.
4. Friction is referred to be a necessary evil because it may be both beneficial and destructive depending on the situation.

What is the coefficient of friction?

Kinetic friction is the resistance to motion between two solid things. The friction in this situation is a small portion of the perpendicular force between the two objects. This is determined by a number called the coefficient of friction. Generally speaking, the force is unaffected by the contact area and is independent of how quickly the two objects are moving.
Static things are likewise subject to friction. Static friction prevents things from moving and is usually greater than the frictional force experienced by two items that are the same while they are moving relative to each other (opens in new tab). A box on an incline is prevented from sliding down by static friction.

Numerous daily processes depend heavily on friction. For instance, the friction causes some of the motion’s energy to be transformed into heat when two objects scuff against one another. This is why rubbing two sticks together can finally light a fire.
The damage to bicycle gears and other moving parts is also a result of friction. Because of this, lubricants, or liquids, are frequently used to lessen friction.