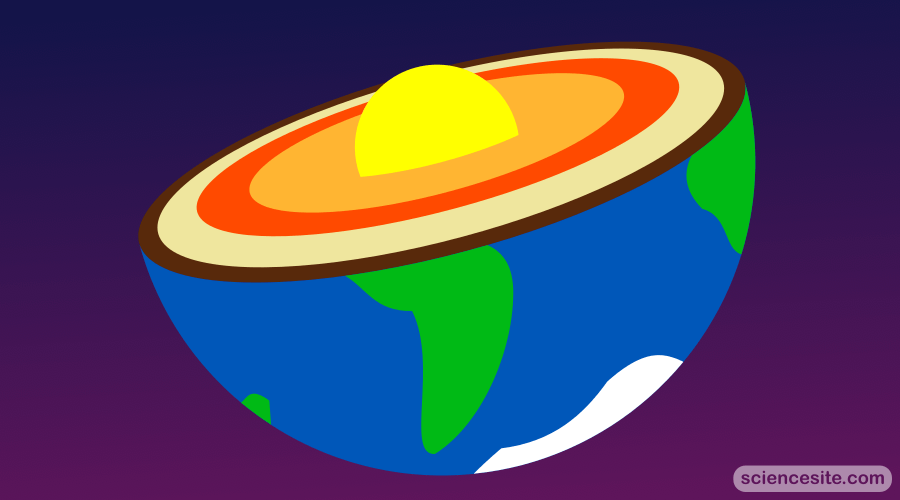 Understanding what lies underneath the earth’s surface might be difficult for so many because it is beyond direct observation. However, learning about the earth’s structure can be quite amazing as you most probably come to know many things that you were not aware of before.

According to Geologists, the earth is constructed of multiple layers that are the essence of it. The model is derived from evidence of different factors including rock type, volcanoes, earthquakes and above all the earth’s magnetic field. The earth typically is composed of two major parts or layers based on chemical and physical properties.

There are five significant physical layers of earth called the lithosphere, mesosphere, asthenosphere, inner core and outer core. On the other hand, the earth’s interior is typically divided into three crucial layers the crust, the mantle and the core. All three layers are divided based on chemical composition and properties. The lightest material makes up the outermost layer however the dense material is what an inner layer is composed of.

The earth’s fundamental theory is based on the theory of “Plate Tectonics” which is also considered the primary principle of Geology. Plate tectonics reflects how the earth layers interconnect and move to each other. Most significantly, the outer layer is categorized into two basic plates named lithospheric and tectonic.

Based on its chemical composition, the earth has three major divisions. Although, throughout the earth, there are infinite variations in composition, however, only two specific changes occur leading to other three significant chemical layers termed crust, mantle and core.

The layer humans currently exist in is the crust – the outermost chemical layer of the earth. The layer is further divided into types including the oceanic crust and continental crust.

A substantial change in seismic velocity – at the base of the crust, is recognized as Mohotovicic (MOHO) which was discovered in 1909 by Andrija Mohotovicic when studying earthquake wave paths. It was caused by a sudden, intense and dramatic change in composition between the crust and mantle underneath the earth.

Moreover, the Moho is nearly 5 km down beneath the oceans and under the continent it is approximately 30 to 40 km. However, except for one called an “orogeny” where the thickness is expected to be doubled.

A layer underneath the crust and above the core is called the “mantle”. Extending from the base of the crust to a depth of about 2900 km, the mantle is one of the most significant layers of all categorized by its volume. One common concept is that the mantle comes from the seismic waves, nevertheless, some direct information can also be gathered from different parts of the ocean floor brought to the surface termed as “ophiolites”.

In addition, carried to the surface by eruptions, there are small chunks of lower rock called “xenoliths”. These xenoliths are composed of the rock peridotite. Thus, many of us believe that the majority of the mantle is comprised of peridotite.

Another most important part of the earth which has both solid and liquid is composed of typically nickel, iron, and oxygen. This crucial part of the earth was first discovered in 1906 by assessing and analyzing seismic data as a whole. Moreover, to arrive at data and to prove the statement that the core is basically metallic iron, it took the set of astronomical insight, experimenting and analyzing seismic data.

It is to keep in mind that, meteorites usually comprise more iron than any typical surface rock. Thus, if the meteoric metal is what the earth is made up of, then the core would have been built with nickel and iron and declared as the dense material that sinks to the center of the Earth.

Furthermore, the earth can be classified into five different physical layers based on physical properties including viscosity, temperature and density.

The outermost physical layer of earth is called lithosphere which means “rock”. In general, it is made up of two major parts including the crust and the Moho. The layer is divided into a small chunk of piece added tectonic plates. In addition, it has both continental and oceanic components.

The layer below the lithosphere is called “asthenosphere” which typically means “astheno”. One of the major properties of the asthenosphere is “movement”. The layer will flow and remain in motion for a fact that is relatively weak as well. To put it simply, this is one of the soft layers of the mantle on which the lithospheric plates move.

Extends to the earth’s core, one of the strongest and lower parts of the mantle is the “mesosphere” layer. It is relatively more immobile and rigid than the asthenosphere, nevertheless, it is still comparatively hot.

The only liquid layer is the outer layer found on Earth. It extends from the bottom of the mantle and surrounds the inner core. The liquidity outer core is approximately 2,270 km thick.

1216-kilometre-thick, the inner core is composed of iron and hotter than the sun. This layer is solid as it bears the pressure from the upper layers.

The earth’s structure is mainly composed of two major layers based on chemical and physical properties. Crust, mantle and core made up the chemical layer. Whereas, the lithosphere, asthenosphere, mesosphere, the outer core, and the inner core layers made up the physical layer of earth. Each layer has its own properties.