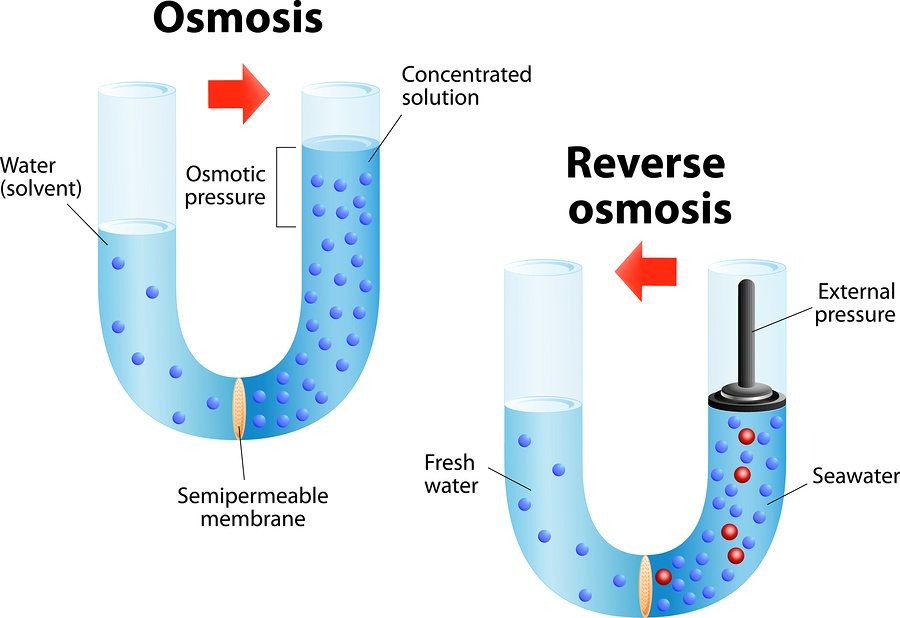 Suppose you have a container which has some kind of solution in it, for example a salt solution. A salt solution will have a common salt as the solute particles and water as the solvent. In a very loose definition, solute particles in a solution are those which are present in lower quantity than the other particles, which compose the solvent. Now let us place a membrane in the container so that the container is divided into two compartments: left and right. Let this be a special type of membrane called the semi-permeable membrane. These selectively allow some particular particles to pass through them but restrain all the other kind from passing. Suppose our semi-permeable membrane allows only the solvent or water molecules to pass through it from one side to the other. Now, if you sprinkle more salt from the top of the container into the left compartment, what do you reckon will happen?

If you perform this little experiment, you will find that the water molecules move from the right compartment to the left. This movement of solvent particles through a semi-permeable membrane is called osmosis. The process continues till the concentration of solute on each side of the membrane becomes equal. Remember that concentration of a solute is defined as the amount of solute particles present per solvent particle.

What does osmosis depend on?

Unlike what you might be thinking, osmosis does not depend on the size of the solute particles. If you took bigger particles as solute for the experiment than salt, the process would have proceeded in the same manner with the same rate. The rate and extent of osmosis depends only on the ratio of the solute particles to the solvent particles. Such a property of a solution is called a colligative property. Only the amount of solute particles that you add will have an effect on how fast water crosses the membrane and by what amount. But what if you applied some sort of pressure to prevent water from passing through? Such a pressure is called osmotic pressure and it plays a very important role in uptake of water by plants.

Why does osmosis take place?