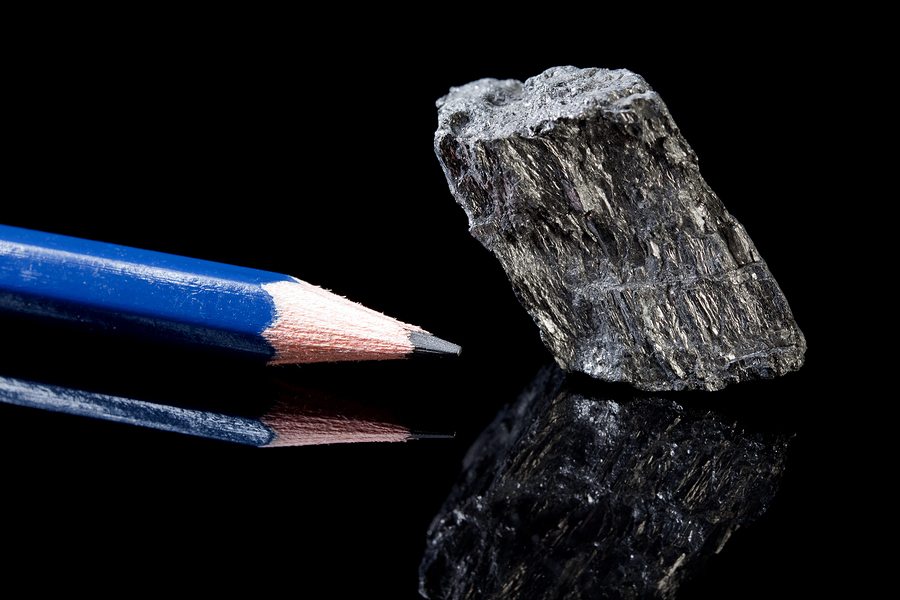 Rough piece of carbon rock mineral in the form of graphite, an allotrope of carbon, known for its use in pencils

It is quite interesting to know that the bright and precious diamond and the dull graphite in your pencils are just different forms of carbon in the solid state. They differ in physical properties as well as chemical properties. At first you might be skeptic because it seems impossible for them to be composed of the same element. One is black, dark, soft, and is used to doodle in classrooms while the other is bright, shiny, colorless, and is used to make jewelry. How can they have the same element inside them?

Some chemical elements are able to exist in different forms in the same state of matter. Oxygen, carbon, phosphorus, sulfur etc. are some of the elements which are able to exhibit this property, called allotropy. For example, oxygen gas and ozone gas are allotropes of the same element oxygen. Both of them are found in the same gaseous state in nature. But they have very different physical and chemical properties. While breathing in oxygen gas is necessary for us to live, if we breathe in ozone our lungs will get severely damaged.

What is the reason for allotropy?

In the case of diamond, the atoms of carbon are very strongly bonded to each other. Each carbon atom is bonded to four other carbon atoms. And this bonding occurs in such a geometric fashion that the physical structure they make up is very stable. The geometric shape in which the atoms of carbon are organized in a diamond is called tetrahedron. Imagine the pyramids of Egypt but with a triangular base. This arrangement makes diamond the hardest substance known to man. Nothing can cut or even scratch the surface of diamond, except another diamond.

In the case of graphite, the carbon atoms are present in planar layers. Every atom of carbon in a graphite layer is in turn bonded to three other carbon atoms. The layers are also bonded to each other with the help of a weak force. This allows graphite layers to slip over each other and so graphite is smooth to touch. The complete build-up reminds one of a honeycomb structure. It is possible to convert graphite into diamond if extreme pressure and heat is applied. These two conditions force the atoms of graphite to get closer and to rearrange themselves in such a way that they form the tetrahedron structure of the diamond.