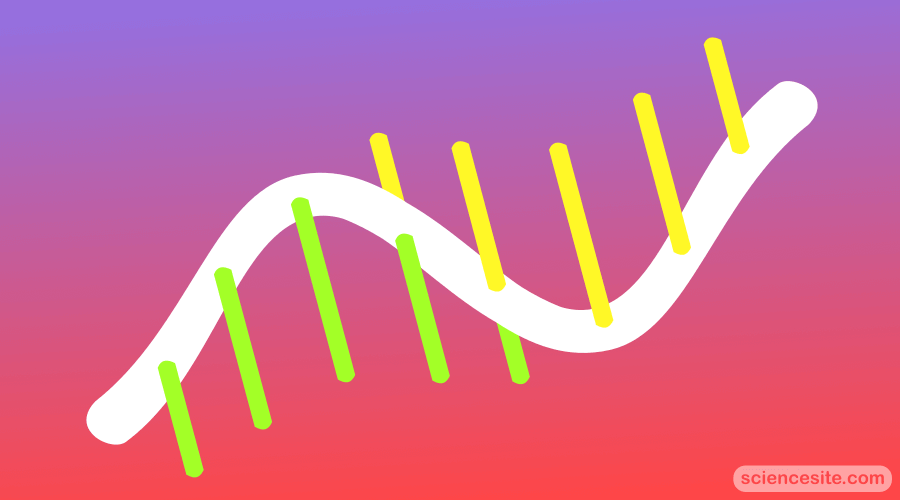 Ribonucleic acid, also known as RNA is a nucleic acid found in all cells in every organism. It is quite similar to DNA and stores a lot of genetic information. However, as opposed to DNA, where the structure is double-stranded and works as the keeper of all genetic information, the structure of RNA is single-stranded and works as more than just the storage of information.
RNA performs various functions in the cell, but the main one that it is involved in is protein synthesis. To understand its functionality, first, we need to understand its structure.

As mentioned above, the structure of RNA is quite similar to DNA. But the RNA usually has a single-stranded structure, made up of ribonucleotides that are connected together by phosphodiester bonds. The ribonucleotide chain in RNA contains one of the nitrogenous bases (i.e. Adenine, Guanine, Cytosine, and Uracil), ribose (the pentose sugar), and one phosphate group.
This structural difference in DNA and RNA, makes DNA more suitable and stable for the storage of genetic information, whereas, the unstable and single-stranded structure of RNA makes it more apt for short-term functions like the transfer of information and protein synthesis.
The RNA pyrimidine is uracil that sets up a complementary base pair with the nitrogen base adenine. This way, RNA molecules display substantial intramolecular base pairings between the sequences found within the single strand of RNA.

The function of RNA and its Types

The cells take hold of the information found in DNA with the use of RNA and then direct protein synthesis by taking the help of a process called translation. These proteins perform various functions within a cell. However, before the protein synthesis can take place, there are three main types of RNA that are involved in the process, which are:

The RNA that is transcribed from DNA is in the form of messenger RNA, known widely as mRNA. It contains the blueprint from DNA that allows the formation of proteins. The mRNA found in prokaryotic cells does not need any further procedure, it directly starts synthesizing proteins.
However, in eukaryotic cells, the RNA transcribed is called a pre-mRNA that experiences maturation to become mRNA. The messenger RNA is composed of nucleotides that are found in the cell nucleus. They make the complementary sequencing with the DNA found inside.
The strands of mRNA are put together with the help of an enzyme called RNA polymerase. The three nitrogen bases found adjacent in the mRNA sequence are known as codons, which contain a code for each particular amino acid that in turn links with other amino acids in specific orders that form the proteins.
As pre-mRNA, the RNA is required to undergo some processes before it can move on to the next step in the gene expression. When the mRNA is transcribed, it also transcribes many regions of the DNA that do not provide code for any genetic information. Therefore, this code needs to be cut before it can move on to the next phase.
These non-coding regions are known as introns. The parts that code are called exons. The introns in the pre-mRNA are cut off by enzymes and the exons are left behind. This way, now the single-stranded RNA is able to depart from the nucleus and start the second part of the process.

This second part of gene expression is known as translation. It is performed by tRNA or specifically Transfer RNA. This RNA has the essential task of ensuring that each polypeptide chain has the correct order of amino acids during the translation process.
The polypeptide chains are highly folded structures that contain an amino acid on one side end and possesses an anticodon on the other end. This anticodon of tRNA is a complementary sequence of the mRNA codon. This way the tRNA makes sure that all the correct parts of mRNA are matched up and the amino acids are in the right protein order.
It is also possible that more than one tRNA binds with mRNA at one time. When this happens, the amino acid forms peptide bonds within themselves before separating from the tRNA and becoming polypeptide chains that are used in the process of forming fully-functional proteins.

rRNA or Ribosomal RNA is named after the cell organelle that it forms. The ribosomes are found in eukaryotic cells that help in the assemblage of proteins. It is the main building block that makes the ribosomes, therefore the rRNA has a vital role in translation.
What it does is holds the mRNA in place which allows the tRNA to match up the anti-codon that is suitable for the mRNA codon that codes for particular amino acids. There are three places that direct and hold the tRNA to the accurate place that also makes sure that the polypeptide is correctly created during translation. The binding sites (i.e. called A, P, and E) enable the amino acids to bond, and release the tRNA so that it can be recharged for further usage.

Even though in larger organisms, RNA does not act as the carrier of genetic information, many viruses that do not contain any DNA, use RNA as their primary genetic material storage. Therefore, this way RNA shows that it has the capacity to work as a hereditary storage system. It is one of the most important components in any cell.
Even though most of the time all viruses have single-stranded RNA like the Ebola virus and influenza viruses, some viruses like the Rotavirus actually have double-strands that are a dead giveaway of viral infection if they are found in eukaryotes.

What are Goosebumps and Why Do We Get Them?