Darwinism – The Theory of Biological Evolution 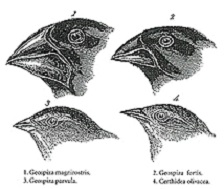 Firstly, introduced in his book, “On the Origin of Species,” published in 1859, CharlIn this theory of his, Darwin explains how organisms have evolved over the years, from generation to generation. He explains all the variations that he has observed within the species of one animal and how they could have been passed down to them from their ancestors.
Let’s learn about this fascinating theory of evolution by Darwin.

So, what is Darwinism?

Darwin’s theory of natural selection states that all organisms develop and improve over the years through the natural selection of small variations that they inherit from their ancestors. This improves their ability to survive, compete and reproduce.
According to this theory, species that possess the ability to adapt to their environment, will be able to survive and have offspring who will inherit those adapted traits. Species that don’t or have less ability to adapt, won’t be able to pass on any new survival traits which will lead them to become extinct in the future.
Over the years, the traits that help the species survive will become recurring in the future generation and the species will evolve and change. Through his theory of natural selection, Darwin also suggested that a genetically diverse species could have been raised from one common ancestor.

Why the Name Natural Selection?

The most popular names of Darwin’s theory of evolution are “Theory of Natural Selection” and “Survival of the Fittest.” Darwin chose the name “Natural Selection”, to contrast it with “Artificial Selection,” where breeders select particular traits in animals and plants that they want in the next generation and then get them to breed.
This way they get the desirable results and characteristics in the future breeds. In natural selection, there is no human touch involved, all the selection and discard is done by mother nature and the environment.
As mentioned before, this theory is also called survival of the fittest. However, here, the fittest doesn’t refer to the athletics and strength of a species, but its ability to survive in the wild and reproduce.
Even though Darwin did not know about genetic mutation, the main cause of evolution, he still suggested that many species that have similar differences can come from one mutual ancestor. Natural selection can in fact change a specie in small ways. From altering size and color to modifying organs, there has been much generational evidence to support this theory.

Darwin presented four ideas in his theory to support it. These points gave depth to his theory. They are:

There is variation in all species. No matter how closely related one is to another, there is always some kind of difference between species even between siblings. From varying in color and size to weight and many other characteristics, every specie has some difference.
Sometimes, one specie from one part of the world is closely related to a specie from the other side of the world but can look entirely different. This is because of the difference in their environment that has forced them to evolve and adapt. An observer will know how distinct all these traits are.

All organisms have inherited characters. They inherit particular traits from their parent. Inherited traits that help in a generation’s survival are most likely to be passed on to the next generation. Some characters also go due to the environment. However, these traits take time because if generation after generation faces the same issue, they start inheriting the solution through evolution.
However, none of the environmental changes like weight and muscle mass are inherited by the next generation. Only traits in the genes are passed on forward.

Most species of animals produce more offspring than the environment can handle. This high rate of birth gives rise to competition between the species from birth. As there are limited natural resources available for them, they compete to survive.
The struggle they face for the resources. This fight determines the mortality of the species. This way all the species that have survived breed and pass on their traits to the next generation.

⦁ Survival of the Fittest

The individuals that have won the battle at the start of their life, also have to survive the rest of their life. So, in order to reproduce, they have to compete for resources, after surviving that, they are ready for reproduction, successfully adding their traits to the line of succeeding genes.
Therefore, the traits that helped these organisms survive are passed on to their offspring this process is known as natural selection. Many conditions in the environment make it difficult for the species to survive, but these conditions also result in the survival of many individuals with particular traits that they pass on through heredity to the next generation. Darwin called this process “the survival of the fittest,” but gives credit to another biologist Herbert Spencer for using the term.

Therefore, Darwinism refers to the changing of species through the generational gap. There are many species in the world that come from a single ancestor but could be found in completely different areas of the world. es Darwin presented his evolutionary theory of natural selection, which came to be known as Darwinism. After studying so many animals and their physical and behavioral traits, he came up with this theory that is accepted to date.