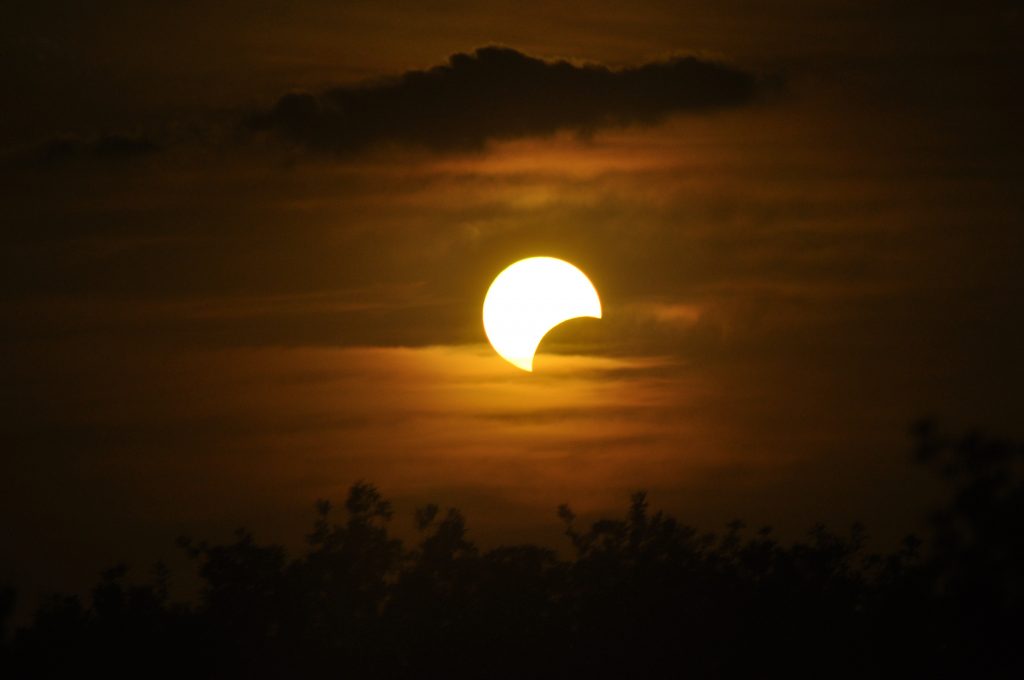 We observe the solar eclipse when viewed from the earth.  This eclipse happens when the moon comes in the path between the Earth and the Sun, and the moon partially or totally hinders (“occults”) the Sun. It is only on new moon that such a situation occurs. When looking from the Earth if we observe the Moon and the Sun in line, we call it syzygy.

When total eclipse occurs, the round shape of the Sun is totally hidden by the Moon, whereas in annular and partial eclipse, only a portion of the Sun is hidden.

Besides, the true orbit of the Moon is elliptical in shape, mostly; it is distant from the Earth, so that its perceptible size is not sufficiently big to obstruct the Sun completely. When the nodes are aligned, the orbital plane crosses one another, which results in a minimum of 2 and a maximum of 5 solar eclipses that occurs every year. Total eclipse does not exceed 2, but rarely does a total solar eclipse occur at any specific point, since the totality happens only when the Moon’s shadow or umbra traces a thin path on the surface of the Earth

The phenomenon of an eclipse is natural. At the same time, in certain modern and ancient cultures, solar eclipse is characteristic of mystical undertones or signifies evil signs. Chances are, for a total solar eclipse to scare those people who are ignorant of its astronomical justification, this is because the Sun appears missing at daytime and the sky becomes dark for a while.

Viewing the Sun with your naked eye, perhaps causes lifelong harm to your eye; even may lead to blindness. Prescribed protection devices for the eye, or methods of viewing indirectly are practiced, during a solar eclipse. Technically, it is safe viewing just the total phase of a total solar eclipse with your naked eye or without any devices, but, this practice is harmful, because the majority of the people, are not taught how to understand the phases of eclipses, this phase transformation extends to 2 hours, whereas the duration of the total phase is limited to just 7.5 minutes for a particular site. Those people who move to far away sites to witness or view the foretold central solar eclipse are called umbraphiles or eclipse chasers.

A total eclipse happens when the dark outline of the Moon totally blocks the Sun’s extremely brilliant light, enabling the visibility of the very pale solar corona.

An annular eclipse happens when the Moon and the Sun are in alignment; however the perceptible Moon’s size is not as big as the Sun. Therefore the appearance of the Sun is like a brilliant ring or annulus that surmounts the dark outline of the Moon

A Hybrid Eclipse, (otherwise known as annular or total eclipse) changes between an annular and total eclipse. At particular positions on the Earth’s surface, it is apparent as a total eclipse, while at some other location it seems as annular

A partial eclipse happens at a time when the Moon and the Sun are not in alignment, besides; the Sun is only hidden partially by the Moon.