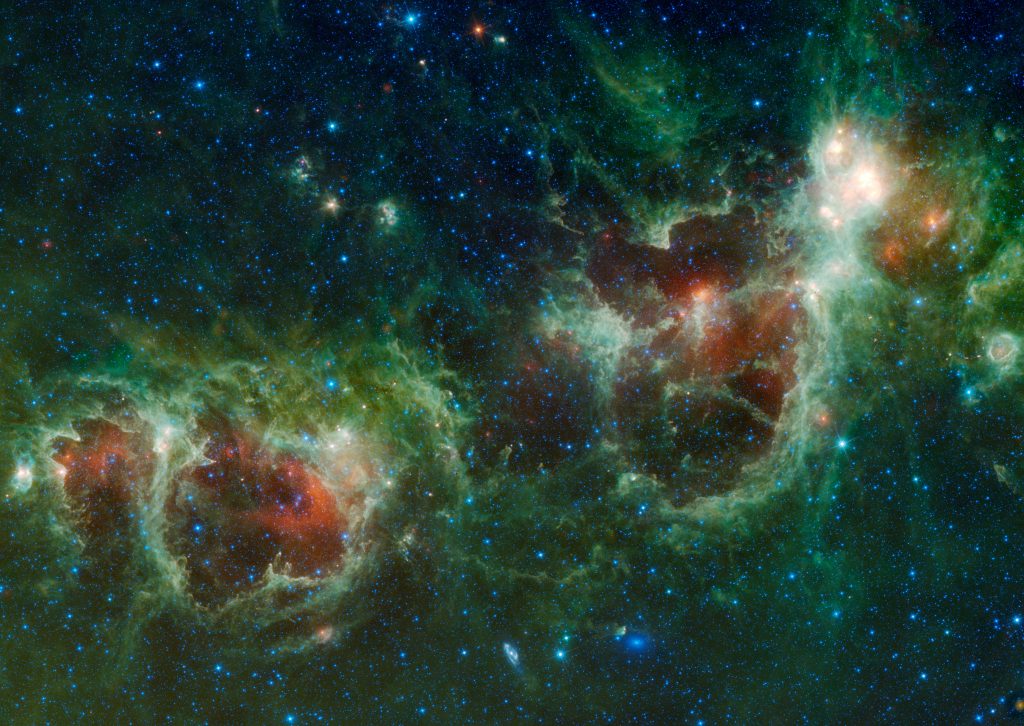 Nebulae are dark, bright clouds of hydrogen, Helium, dust and other ionized gases, which are balanced in an interstellar medium. Actually, Nebula is a Latin word which means “cloud”. Nebulae are called Planetary because they appear round and greenish like Planets when viewed through a Telescope. Usually, they are formed   in the interstellar medium by the gravitational collapse of gases. The particles which collapse, have their own gravitational attraction and they bunch together to form clouds. They are Ginormous (Extremely Large) and may extend over hundreds of light years across. Nebulae are referred as a nursery of stars of the Universe because stars frequently form inside the nebulae. They have different types of shapes, some look like a crab, some like a butterfly, some look like a horse and some look like a cat’s eye. When stars form inside a nebula, then ultraviolet rays are emitted and the whole nebula is lit up which resulting emission nebula. Usually, emission nebulae are red or pink in color because of the hot sizzling ray particles but they also have other colors.

About 150 AD, Claudius Ptlemaeus, recorded five stars which appear nebulous, in books VI and VII of his Almagest. Between the Leo and the constellation Ursa Major (Also known as the Great Bear, it has a companion called Ursa Minor,), he also noted an area of Nebulosity, which was not linked with any star. As different from the cluster of stars, the first true nebula was declared by Abed al-Rahman al-Sufi, a Muslim or Persian astronomer in his book of five stars. In the Andromeda galaxy, he noted a “little cloud”. In the year 1610, by using the telescope, the Orion nebula was discovered by Nicolas-Claude Fabri de Peiresc. In 1618, this nebula was also observed by Johann Baptist Cysat. Until the year 1659, the first complete study of the Orion nebula would not be completed by Christiaan Huygens. He also thinks himself to be the first person to determine this Nebulosity. In the year 1715, a list Edmund Halley published an inventory of 6 nebulae. During this Century, this number gradually increased. Jean-Philippe De Cheseaux accounted for 20 nebulae. From the year 1751to 1753, from the Cape of Good Hope, Nicolas (Louis) De Lacaille listed 42 nebulae, most of them previously unknown. Then, Charles Messier collected a list of 103 “nebulae”. Detecting comets was his main interest. By the efforts of Caroline Hershel and her brother William Hershel, the nebulae number count had gone up substantially. In the year 1786, their Catalogue of one K new nebulae and bunch of stars was available. In 1789, a second list of one K Nebulae was published and a final list of 510 followed in 1802, the final list of 510 appeared. After doing much of their work, William Hershel thought that these nebulae were just a loose array of stars. At the beginning of the year 1864, William Huggins analyzed a band of about seventy nebulae. He noticed that hardly thirty Percent of them had the emission spectrum of gas. The remaining explained a constant spectrum and therefore was assessed as a star mass. In 1912, Vesto Slipher added a third category and showed that the star Meropa was shrouded by the Nebula’s spectrum..

In the interstellar medium, Stars or many nebulae may form from the   collapse of gas gravitationally. The collapse of the material because of its own weights my cause, huge stars to form in the center.  The gas surrounding all this tends ionize the ultraviolet radiation so that they are viewable at optical wavelength. Pelican nebula and Rosette nebula are examples of these kinds of nebulae. As a result of the explosion of a supernova, some nebulae are formed. The material lobbed off from the supernovae explosion is ionized by the compact object and the energy which it can produce. Crab nebula in the Taurus is an excellent example of this. In the year 1054, the scientists recorded the supernova event and labeled it as SN 1054. The dense object which was formed post the explosion lies located in the center of the crab nebula’s center and is a Neutron Star.. Planetary nebulae may form by the other nebulae. Stars with a group of 8 to 10 solar masses, evolve as  red giants and during throb in their atmospheres, they slowly shed their exterior layers. The temperature increases when a star has lost its enough material.

Nebulae have to four major clusters and they are:-

Mainly nebulae are explained as diffuse nebulae due to the fact that that they seen complete and exhibit no defined boundaries. These nebulae can be classified into reflection nebulae and emission, in the visible light. From the ionized hydrogen gas, Emission nebulae emit spectral line radiation and often they are known as HII regions. Significant amount of viewable light does not emit by the reflection nebulae, but they stay near and also reflect light from them. Nebulae not lit up by the stars and do not show visible radiation, but from the luminous objects behind them, then they may be identified as opaque clouds and they are known “dark nebulae”. At the optical wavelength, these nebulae have different visibility. Mainly from the dust that is available within the nebulae, they all are bright source of infrared emission.

From the shells of gases, planetary nebulae may form, which are turned out from asymptotic low mass enormous branch stars, when they convert to white dwarfs. The first astronomical observer gave their name as “Planetary Nebulae”. He was able to differentiate them from planets, which have a tendency to confuse them with planets. About 12 billion years after its formation, our sun is predictable to generate a planetary nebula.

When a star of high mass nears its life expectancy, then a supernova occurs. And the star collapses when nuclear fusion stops at its core center. Supernova remnants are formed by the gas shells. It is a special diffuse nebula.